Second Spring in the Vaucluse 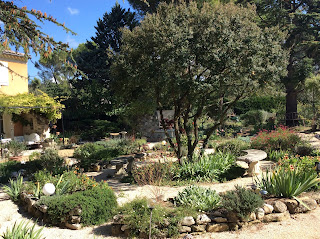 Here's an overview of the "new" garden paths, which I did this year. Its called clapissette, and is the material used for petanque courts. It looks and behaves very much like decomposed granite, which does not seem to exist here. 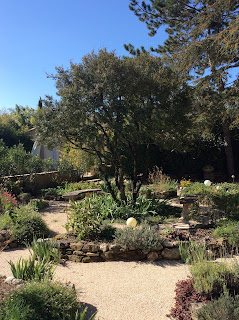 The buis (boxwood tree) is looking quite good, that's it at night as my logo. It really a beautiful plant, and the biggest boxwood I have ever seen. Mostly they are little square hedges or silly looking balls. I may have posted in the past that this one was pruned as an egg and you could not see the trunks at all. 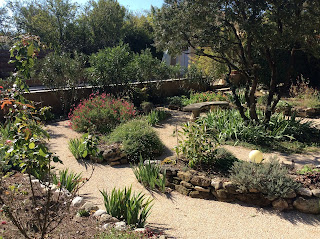 The spot of color on the left is salvia, we have quite a few of them, and all are blooming. They have done so all summer, and will probably continue into December. Very reliable plant.

One of my terraces is below, a nice sunny spot for a warm fall day. 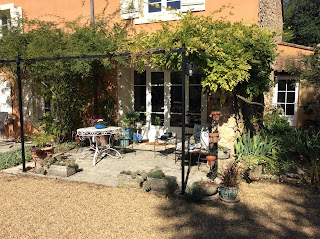 Last of all, the well garden. This is a good view of the new hardscape. 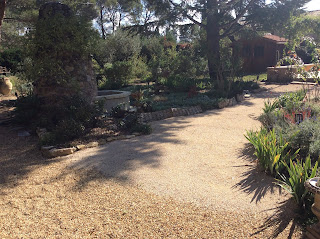 Posted by bonnie groves poppe at 5:18 PM No comments:

BEES! BEE NESTS! BUT WHAT BEES? 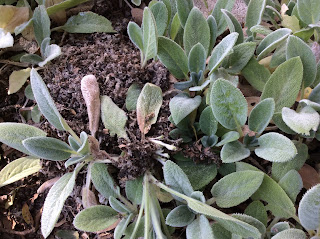 We have quite a few different wild bee species here on the property, one of which is called "wool carder bees" because they scrape the hairs from fuzzy plants to line their nests. The plant in this photo is Lamb's Ears, one of their favorites, and we have a lot of it in many places in the garden. Starting last year I noticed mounds of what appear to be shredded up lamb's ears, and upon investigation I discovered they were full of bees. We are having a trench dug for the fiber optic internet cable, and this nest is right where the trench is going. There are a couple of houses on this property, and I may not be able to convince other residents to hold off. Siting it elsewhere is not an option. If these bees will move on soon, we might delay a bit, but if they will overwinter we can't wait that long. 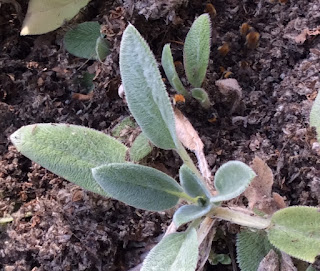 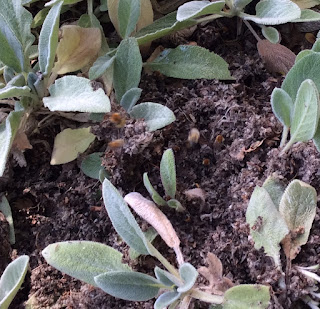 I can't convince them to sit very still so I can photograph them. They are very docile and not interested at all in attacking or stinging me. 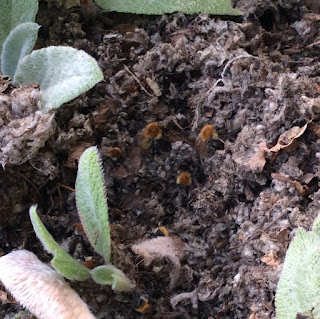 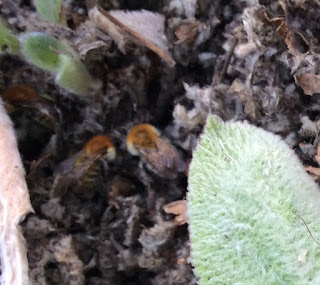 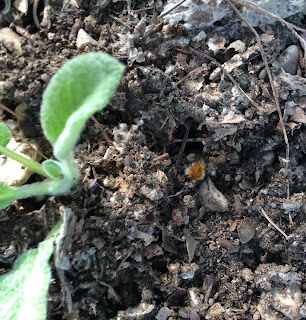 This last photo is of the nest that I tried to move a week or so ago, there are some bees there but it isn't as large as it was before I disturbed it. When I did, I saw some nests that looked like photos on the internet of carder bees. Groups of round nests, not holes in the ground which are ivy bee nests. So I think these are carder bees, but if anyone knows please tell me! 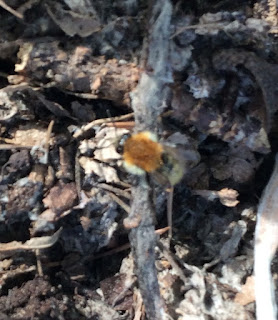 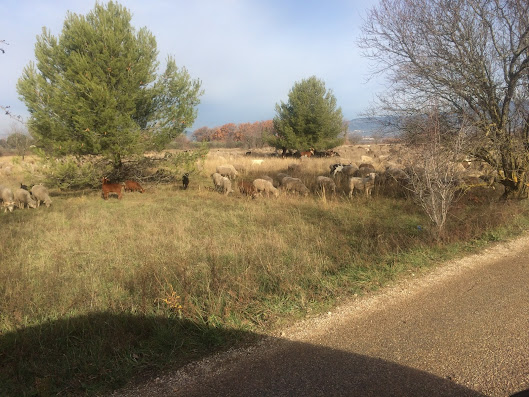 Avec des chevres (with some goats). And yes, they are a troop, as you can see from this sign: 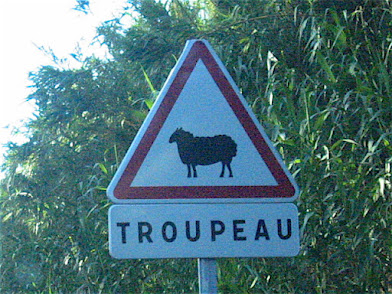 This particular troopeau consisted of about 100-200 sheep + a few goats, and were less than a kilometer from my house on the back road I take to the village of Mazan. I was so astonished I had to take a photo or two. They do not live around here, the fields where the photos were taken are fallow or in vines. I've never seen a herd of sheep around here. 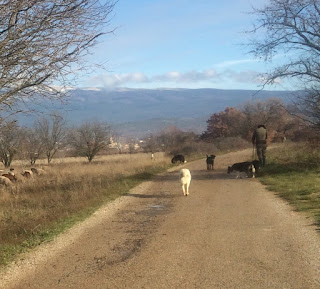 Here is the shepherd and his dogs. He is wearing the official shepherd outfit with black broadbrimmed hat and carrying a stick. He was a fairly young man.  At this stage of the meal the sheep were on both sides of the road. 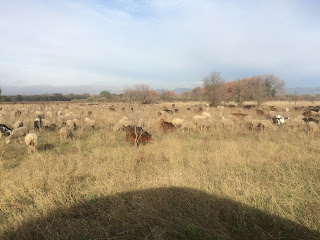 This is the group on the other side of the road. Really a lot of sheep. I couldn't tell if they were wool sheep or food sheep, or I suppose both. I saw no younger looking sheep, they were all quite similar in size.

I would have liked to know how he got them here. Not in a truck, too many. They had to have walked here, which would involve crossing numerous roads and going through areas with quite a lot of houses. I will try to remember to ask some of the local people if they know anything about it. I felt like I had driven into another century. 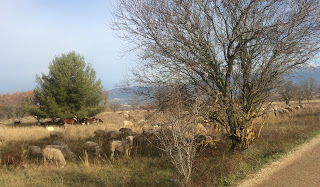 Posted by bonnie groves poppe at 2:27 PM No comments: 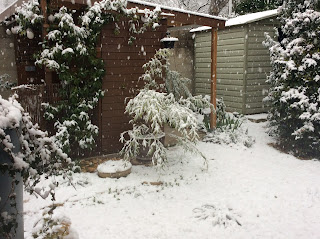 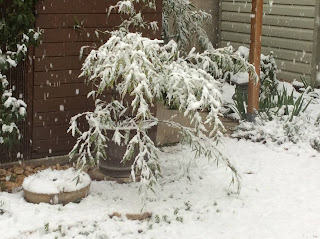 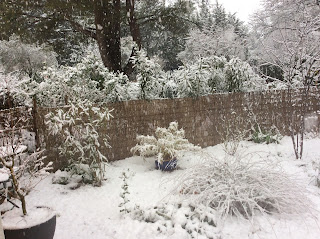 This is my rear "japonesque" garden, the gaura in the center looks great covered in snow. 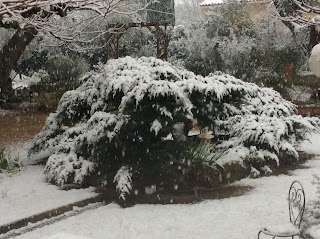 And the juniper on the entry terrace is quite picturesque, its a snowy japanese landscape. 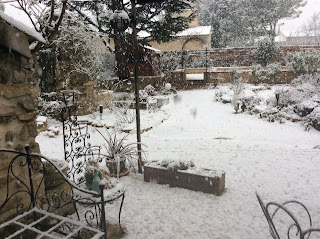 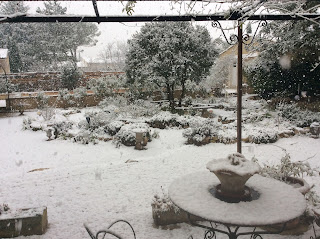 Looking south towards the pool, from my small terrace. Its not very cold, its all melting now, but it looks nice. However, I did not go out in my car as planned. I don't do snow driving.

Hope you're all fine, please stay that way.

Posted by bonnie groves poppe at 5:18 PM No comments:

Here I am back on the "Blogger" site, Wordpress changed everything and made it more complicated, and if you want it less complicated you have to pay, so I went back to this site. As I usually do, I set up my 3 Christmas trees the day after thanksgiving. Here's one, and also a poinsettia! These are exciting times inside the house, as I don't go out a lot. 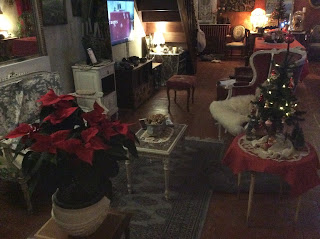 However, I did go out today, to the Pernes les Fontaines market and then to a friend's house that is a couple of blocks from the market, we sat outside and had coffee etc. Its been pretty warm here, we sat outside in coats but were not cold. I will have friends over on christmas eve eve during the afternoon and we will have an outdoor party. Everyone is paranoid about being indoors with other people, no one wants to get sick and die. 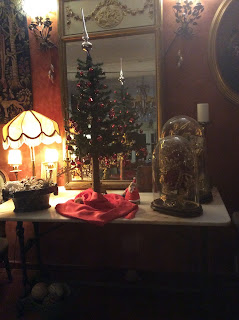 Here's another tree: this one is the "red" ornament tree, the one before is the "figural ornament" tree. Next one up is the "vintage ornament tree." I have to change it up a little each year: same trees, different ornament choices 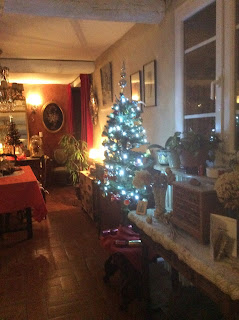 Unfortunately, due to the lights you can't see the ornaments, you will just have to trust me on this one.

A couple of weeks ago at the Pernes market there were donkey carts giving people rides, mostly children. This sort of thing is not unusual around here, there are a lot of people who still like the old-fashioned sort of celebration. 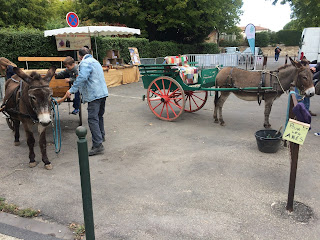 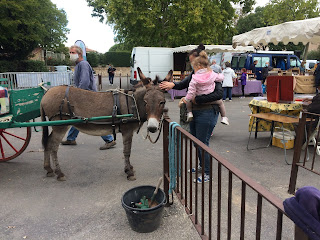 There was also a horse and wagon version a week or so later. 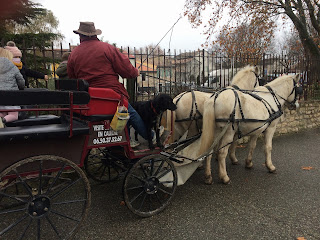 I've been pretty lax about blogging due to my dismay with the changes to Wordpress, but was delighted to discover that my old blog site is still alive and I can go back to it. Not fancy but it works. Will post some catchup blogs soon.

I've decided to move the blog to wordpress.com. All of you who are signed up will need to sign up on that site, sorry. Maybe I'll be encouraged to write more than once a year. I think the key to doing a good blog is to do a little bit, very often. I end up waiting until I have too much to tell, too many photos to post. Hope to do better .....
Posted by bonnie groves poppe at 9:33 AM No comments:

Back from the USA 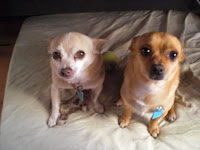 I 'm back in the village, after being away since November 23. I returned January 1, so was in the air for New Year's Eve, wherever that occurred. I was on Air France, so got a glass of champagne earlier in the day (complimentary of course). The flight was fine, I slept through a lot of it, in spite of the fact that I had to hold the dog carrier with my new chihuahua (Churro) in it as he became agitated on the floor and tore holes in the carrier. He's the darker one in the photo, the other one is Nacho.

Prior to arriving in the US on Nov. 28, I spent five days in Paris with my friends Jean Pierre and Ellen, enjoying Paris. Did a little shopping, a lot of eating, and one day we went to the new Museum of World War I (http://www.museedelagrandeguerre.eu/ and https://francetoday.com/articles/2011/11/14/meaux_s_new_museum.html). It was fascinating, as it covered the reasons behind the war, what had been going on in Europe, etc.

After arriving in San Diego, I went to Portland to visit my aunt (age 95) and cousins for five days. It was a very good visit, I enjoyed it very much and it went by quickly.

Back in San Diego, at Rob and Mike's to begin with, and later at David and Vykki's "holiday home" on 20th Street, I got busy with work. Darling Nick Taylor loaned me one of his fleet of Mopar products -- the most modern one, his 2000 PT Cruiser, very like the one I used to own. It was a huge contribution to my visit. Dave Caldwell and I (mostly Dave I think) put down a new hardwood floor in my duplex downstairs living and dining rooms. I should have done it when I bought the property 19 years ago, but there were always tenants in it. We did it while the tenants were on vacation over Christmas and New Years. The old floor heater had finally given up as well, so Mike, Rob and Steve (the plumber) put in a new wall heater. Did some other small repairs to the place.

I also got a 4x4x8 crate packed with things to bring to France. I don't foresee leaving any time in the near future, so wanted to get some things over here that I've missed and can't easily replace. That required searching for things in the totally stuffed full duplex garage. Christopher helped me every day, without complaining! Between the searching and the packing I think it took a week to ten days. Chris was there for me all the time, including entertaining me as well as working.

In the evenings I tried to see everyone possible. Played dominoes as often as possible with Chris, Mike and Rob. Spent a lot of time at Mike and Rob's, dinners and just stopping by for short visits. Went to Pat's Christmas Party, with very good food and lots of mutual friends. I had my own party on Christmas Day at the 20th Street house, which David and Vykki kindly consented to -- we were all careful not to trash their place! Had about 20 people there throughout the day.

I also had business to transact, banking etc. and managed to get most of it done. The time went by very quickly, and I took my last day in SD off by going to the back country with Rob and Mike.

There has been a new development regarding my planned parking on a small parcel above my house along the road. I went to the home of the owner of that parcel for an apero at their home last evening. As some of you know, we had discussed the possibility of sharing the cost of building parking on the parcel and sharing the parking. This fall they were able to purchase another parcel along the road and can dig out to create 3 parking spaces. The papers are in the process of signing and once it is a completed deal I can buy "my" parcel from them. The cost of developing parking on this parcel without using part of my existing property would be prohibitively costly, so hopefully this is good news. I can buy the parcel, and develop it for up to 4 cars.

Another interesting developiment is that I've discovered that Roman coins have been found near the tower, and that there is a Roman villa and cemetery on the property of the Claparede domaine (this is the family from whom I buy my wine), a couple of kilometers outside the village. I need to keep digging around here!

I think that's most of the news around here. Still waiting for completion of my "attic suite" which I hope will have happened by the first of May or sooner. Its sunny and about 50 here at the moment (noon). Guess I'll build a fire ....

Posted by bonnie groves poppe at 12:13 PM No comments: